Volunteer of the Month - Craig Arthur 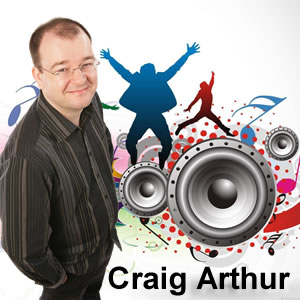 As we move into Radio Royal's new year, we say goodbye to our Executive Committee and welcome in a new crowd to look after all the goings-on at the station. One member we can always rely on though (partly because no one else understands what he does) is our engineering and technical guru Craig Arthur - so it's about time we hear his Volunteer of the Month story!

When did you join Radio Royal?
I joined Radio Royal after seeing an ad in the Falkirk Herald just before I turned 20 way back in June 1997.

Tell us a little more about what you do at the station!
I present The Hit Machine, 2 hours of current hits mixed with songs going back to the 80's.  As well as that, I recently started to do some extra shows, Hit Machine 90's and Hit Machine 00's, in true Cuprinol style they do exactly as they say on the tin.
As well as presenting those shows I'm also responsible for maintaining all of Radio Royal's IT and transmission infrastructure.  When things go wrong it's me everyone looks at.  When things go right they don't notice...

Why did you decide to volunteer?
I'd always been interested in radio as a kid and used to pretend I was on the radio in my bedroom with a cassette & CD player on "Radio 5" long before the BBC had the idea and the real Radio Five as it was then launched.  At least now there are listeners!

What would you say to someone who was considering volunteering in hospital radio?
Do it!  There are loads of different opportunities available to you, everything from ward visiting patients, to presenting shows, to behind the scenes roles that are just as important.  Whatever your skill set we will have something to suit.